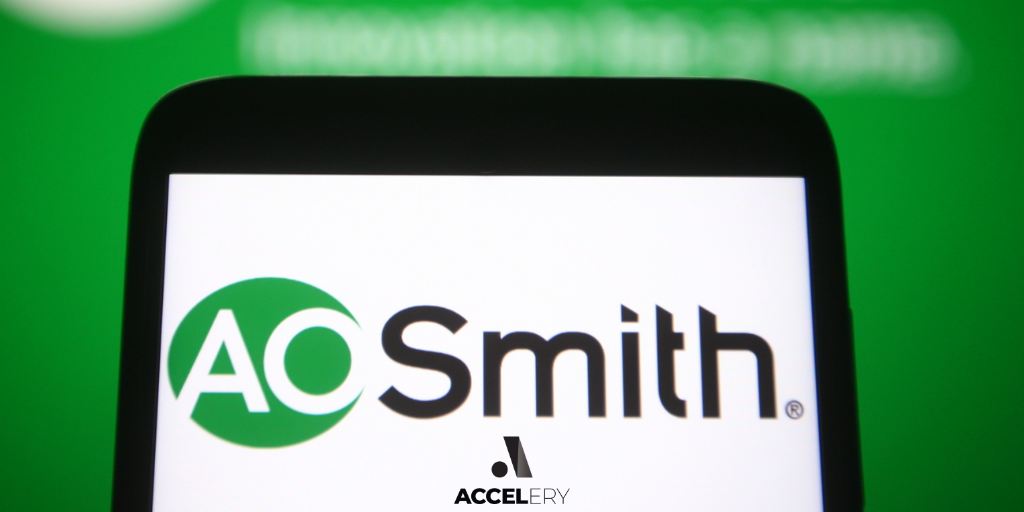 From bike makers to world leaders in residential and commercial motors products, A.O. Smith has run the gamut of sustainable business practices. The company is one of the largest manufacturers of water heaters in the world and is positioned at the forefront of water treatment services. For a time, the company was a diversified manufacturer, gradually narrowing their corporate vision and divesting with the popular market trends. Pioneers of essential industry, A.O. Smith has developed and sold energy-efficient solutions and products on a global scale.

Over a century and a half, A.O. Smith has undergone numerous industry shifts. Back in 1874, the corporation was a family business that carriages. As highly skilled metal tradesmen, the Smith family made a good living by opening a machine shop and creating their wares. Over 20 years later, the company served as the country’s largest bicycle parts manufacturer, boasting the world’s first pressed steel vehicle frame. Hitting while the iron was hot, the company sold their industry when bike popularity peaked. With their new influx of cash, A.O. Smith jumped on the automobile bandwagon. Clientele included all notable car manufacturing companies at the time. In particular, Henry Ford contracted A.O. Smith with frames for his Model N vehicle. By the early 20th century, more than half of passenger cars in the United States were equipped with their patented frame; A.O. Smith produced nearly one million frames per year at the time.

The 1990s brought international expansion in Asia; the next decade was marked by a number of China-based acquisitions. After 90 years in the automotive industry, A.O. Smith sold their automotive products business in 1997.

In 2011, A.O. Smith finally parted with their electric motor business, shifting their strategy to a world-leading global water technology company.

In terms of commercial water market share, A.O. Smith leads the pack, taking up around 50% of the market.

The company is comprised of two reporting segments: North America and the Rest of World. Stateside, A.O. Smith serves residential and commercial markets with a broad range of products including: water heaters, boilers, water treatment products, and other. A significant portion of domestic sales are derived from replacing existing products. A.O. Smith has operated in China for over a quarter-century, including 13,000 points of sale abroad. Approximately 33% of the companies net sales were attributable to products sold outside of the U.S.. 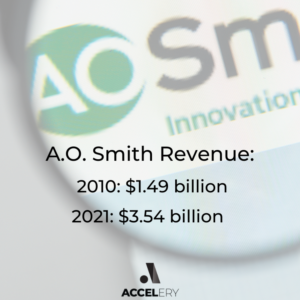 As of this writing, stocks were estimated at near $60 a share. According to their Q4 FY 2021 financials, the United States saw a 19% increase and higher volume of sales. These sales are generated through robust direct and retail selling channels. The Rest of World saw an increase of 30% in sales, fueled by China and new market demand in India. Overall, the company saw a 22% increase in sales, compared to the year prior.

Similar to the rest of the industry, the company’s performance has been negatively impacted by high costs and expenses associated with supply-chain constraints and higher logistic costs.

Over the last decade, A.O. Smith has increased their water technology by 100%. Interest initially began in 1936, when the company patented a glass-line water heater. Eventually, globalization became a temptation difficult to denounce, and the A.O. Smith became the first-ever water heater manufacturer to enter the China market. In 2016, A.O. Smith acquired Aquasana, an Austin-based B2C water treatment facility, which assembles and sells premium house water treatment options. Recently, A.O. Smith purchased William R. Hague Inc, a manufacturer of water softener products. At the end of the decade, the company unveiled a state-of-the-art center in Milwaukee, specifically for research and development for the following divisions: potable/hydronic water heating, treatment, and air purification.

Learn more about businesses that have had significant growth over the past decade and what their competitive advantage is that propels their digital transformation. Read ” 8 Significant USA Business Transformations.“